A former convent makes a beautific B&B in the luscious coastal countryside of Puglia. Owned by British aristocrats Alistair and Athena McAlpine, Il Convento di Santa Maria di Costantinopoli was Lord and Lady McAlipne's private home before they opened it up to paying guests in 2003. The eight room establishment is adorned with art and treasures from the couple's world travels and the library features an extensive collection of first-edition titles. We made our way there in 2004, before I had a digital camera! 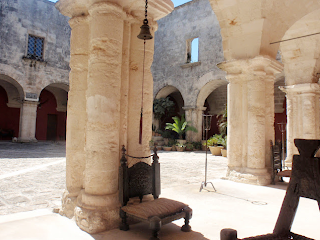 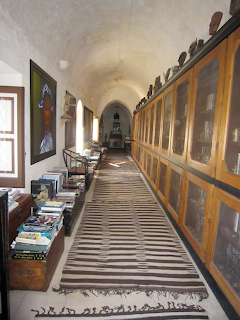 I will scan additional pictures later. It was magic, the land, the food, the rare cacti collection, the herb garden, the wine cellar and the textiles! Highly recommend- no website, just call! Via Convento, Marittima di Diso; 44-7736/362-328; doubles from $300, including breakfast, lunch, wine, and laundry service.
Posted by T&V at 4:59 PM

AP is a shop in Lakeside, Michigan that specializes in jewelry and textiles. We also carry small exclusive capsule collections from contemporary designers. We travel each year looking for artisans and indigenous textiles and craft, which becomes the focus for the season.
If you are ever in Lakeside, please do come by.
Our address is 14931 Lakeside Road, Open Memorial Day through Labor Day, Friday through Monday from 12 p.m. to 5 p.m. EST, or by chance or appointment, 708-359-9204.
Thanks for stopping by and enjoy.
AP Shop